The Return of Joe DiMaggio 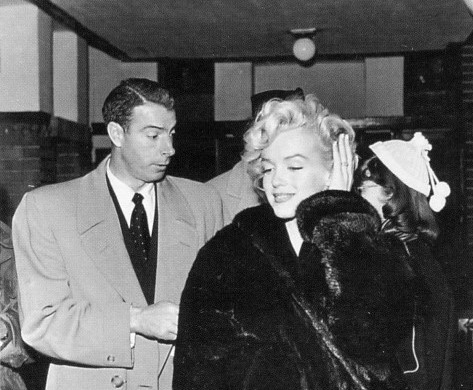 Only a few critics liked Let’s Make Love and The Misfits and neither movie could be called a huge box office success. So with the start of 1961, Marilyn wanted to engage herself in a new project that would mitigate the bad memories and perceived failure of her 1960 movies. Along with Lee Strasberg, she entered into negotiations with NBC Television for a production of Somerset Maugham’s Rain. Contracts were ready for signatures. Strasberg insisted on directing but the network would not accept him in that role. They preferred to sign an experienced television or movie director. The NBC executives wanted to sign Marilyn and even offered her the role as a consultant with influence on which director they selected but she decided to remain loyal to her friend and mentor. Despite Maugham’s support, his best wishes and admiration (Spoto 453), the project collapsed.

Disappointed, she still had the unpleasant task of ending her marriage to Arthur Miller. She traveled to Mexico, where, on Friday, January the 20th, the day John F. Kennedy repeated the Oath of Office and became the 35th president of the United States, Marilyn appeared briefly before a magistrate and asked for an immediate divorce. Her request granted, she returned to Manhattan on Saturday evening where reporters with questions awaited. Always the very embodiment of discretion and grace, Marilyn spoke about her soon to be ex-husband: It would be indelicate of me to discuss this. I feel it would be trespassing. Mr. Miller is a wonderful man and a great writer, but it didn’t work out that we should be husband and wife. But everybody I ever loved I still love a little. The dissolution of the marriage became final with the arrival of Tuesday. Donald Spoto observed:

Marilyn displayed her customary dignity when publicly discussing former husbands or lovers … Typically, there was no bitterness, no rancor toward those from whom she felt estranged, even from those she felt had in some ways abused, demeaned or been faithless to her. Marilyn confided only in friends whose discretion she could trust: she had no desire to justify herself before the press (Spoto 455).

Eight days later, on February the 1st, she attended the premiere of her final completed movie with her friend and costar, Montgomery Clift.

What would be a year of incredible upheaval and illness, the start of February found Marilyn in an oddly darkened and saddened mood, reflecting the Manhattan winter. Still reeling from Clark Gable’s death, her third failed and childless marriage, Marilyn’s private depression deepened. She retreated alone to her dark apartment where she subsisted on pills and champagne while listening to morosely sentimental records. Her mental condition and weight loss concerned Dr. Kris and she coerced Marilyn into a hospital stay. Little did Marilyn know, as she signed her admission papers, that she was entering Payne-Whitney Clinic, New York City Hospital’s psychiatric wing. Once inside, they locked in a room and Marilyn became all but hysterical. According to the doctors and staff of what amounted to an insane asylum, Marilyn was extremely disturbed, potentially self-destructive (Spoto 456). The lifelong fear that she was going to end up institutionalized, like her mother, seemed to be happening and for no good reason.

Three days of entreaty for release fell on disinterested ears. On the 8th of February, she was allowed to send a note to the Strasbergs; but lacking any kinship with Marilyn, they could not get her released. She must have felt like Franz Kafka’s Joseph K, imprisoned by powerful, faceless forces: I felt I was in some kind of prison for a crime I hadn’t committed (Spoto 460). Finally, allowed to make one telephone call, she reached Joe DiMaggio in Florida. Although he and Marilyn had not been together for several years, without hesitation, he flew to Manhattan and arrived at Payne Whitney on Thursday evening.

He demanded that they release Marilyn into his custody by the following day. If not, he promised to take the building apart brick by brick with his bare hands. On Friday, the 10th, Joe helped her check into Columbia University Presbyterian Hospital where she recuperated until March the 5th. Pat Newcomb, Marilyn’s assistant, considered Joe a hero, possibly the only man in Marilyn’s life, with the influence he wielded in New York City, who had the power to get her released from Payne Whitney, considering the influence of Dr. Kris and the circumstances of Marilyn’s confinement.

But the trauma of 1961 was just beginning. She was released from Columbia Hospital on March the 5th but on the 8th, she attended her ex-mother-in-law’s funeral at a Brooklyn chapel. To Arthur she offered condolences; but she tried to sooth Isadore, Arthur’s elderly father. She had just been discharged from the hospital, Isadore later commented, and I was about to enter one myself. When I did, she called me every day after my operation, wiring flowers and phoning my doctor (Spoto 464). Her affection for her former father-in-law remained unaltered by her divorce from Arthur. With the end of March approaching, she traveled to Florida where the Yankees and Joe were in Spring training. From St. Petersburg, the famous couple traveled to Redington Beach where they simply relaxed and enjoyed each other’s company.

In May, Clark Gable’s widow, Kay, invited Marilyn to attend the christening of John Clark Gable, the King of Hollywood’s only legitimate child, thereby ending the ugly rumors that Gable’s widow blamed Marilyn for her husband’s death. Soon thereafter, her gynecologist, Dr. Leon Krohn admitted her to Cedars of Lebanon Hospital, where he operated, once again, to relieve her painful and chronic endometriosis. By mid-June she felt well enough to talk about a return to work; but the persistent abdominal pain and indigestion that she had experienced throughout the spring suddenly intensified, so friend and masseuse, Ralph Roberts, accompanied Marilyn to the east coast. On Wednesday, the 28th of June, she checked into the Manhattan Polyclinic where surgeons removed her gall bladder (Spoto 467). In her room after surgery, she awakened to the face of Joe. He visited her everyday of her week-long stay in the hospital.

Prior to Marilyn’s surgery, she and Berniece conspired to arrange a secret visit in New York City. In early July, using an alias and wearing a disguise, Berniece flew to Manhattan where she hid briefly at the Park Sheraton Hotel. Finally, Marilyn sent word that her sister could safely take a taxi to 444 East 57th Street. There not only to visit Marilyn and to assist with her convalescence, during recent telephone conversations, Berniece had sensed a change in her sister, one she found disturbing; and, too, Marilyn had asked Berniece to come. During her two week visit, she met Joe DiMaggio, who presented her with an autographed photograph. She also met Ralph Roberts, the Strasbergs and many of the friends and acquaintances who dropped by Marilyn’s apartment for unannounced visits, not to mention a few of Joe’s Manhattan pals. The sisters spent most of their time together in Marilyn’s apartment where they discussed their lives, their troubled mother, Marilyn’s problems with Fox, Sir Laurence, Arthur and Joe. The sisters invested some time getting manicures and pedicures, a new coiffure for Berniece and, of course, shopping (Miracle KE:18). Neither sister could have known, as they embraced and expressed their love for each other the day Berniece departed, they would never be together again.

In August, Marilyn returned to Los Angeles by air while Ralph Roberts drove his car cross country. During her convalescence, Marilyn decided to make Dr. Greenson her permanent psychiatrist since she had immediately dismissed Dr. Kris after the Payne Whitney episode and could not find a therapist she liked in Manhattan. Over the ensuing months, as Marilyn’s sessions with Greenson increased, he began to assert a considerable amount of influence and control on Marilyn’s life. On his suggestion and recommendation, Marilyn hired Eunice Murray. Dr. Greenson wanted Marilyn to buy a house, ground herself; and he advised Marilyn that Eunice would make an ideal friend and housekeeper.

In November, Fox contacted Marilyn and reminded her that she was contractually obligated to them for two movies. So she began negotiations to appear in the remake of the forties bedroom comedy, My Favorite Wife. Renamed Something’s Got to Give, she agreed to perform with friends Dean Martin and Wally Cox. George Cukor was selected to direct, a choice Marilyn approved. As the holidays approached, Joe and Marilyn were an item once again, but she publicly denied any chance for a remarriage. Reluctantly, Joe agreed to spend Christmas evening with the Greenson family. But Joe and Marilyn celebrated the birth of 1962 while enjoying each other’s company in peace and quiet. All that remained was Marilyn’s journey to immorality.