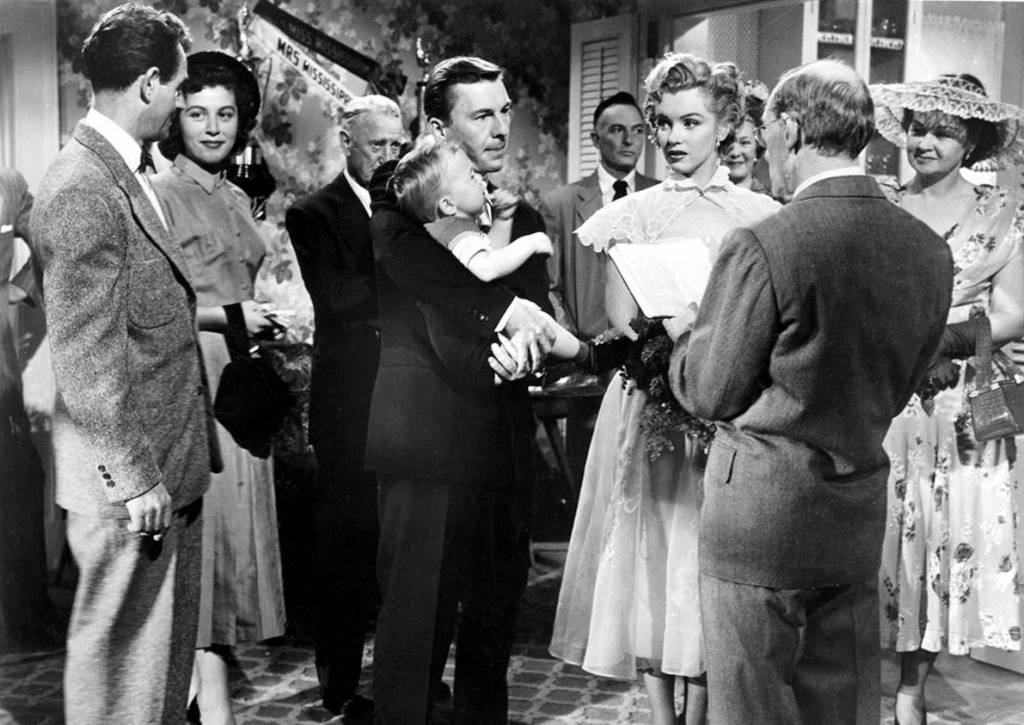 If you have watched We’re Not Married and O’Henry’s Full House, then you know that they are very similar. They differ in two respects, though: Edmund Goulding directed the five movie vignettes in this anthology and Marilyn’s role is slightly larger in this one than her role was in the other one with Charles Laughton. Even so, the packaging of this 20th Century-Fox also borders on false advertising and fraud. Marilyn only appears in one of the episodes and not all five. It’s obvious why Fox misleads consumers, however. None of the other actresses appearing in the other vignettes have the allure, the selling power of Marilyn, including Ginger Rogers and Mitzi Gaynor and probably would be unable to attract buyers on their own merit or fame. It’s doubtful that any of the men appearing in this anthology, including David Wayne and Louis Calhern, would generate even one sale. Contradict me if you can, but the studio that consistently used and abused Marilyn, while she was alive and earning them millions of dollars, continues to do so over five decades after her death and she still continues to earn them millions and millions.

Victor Moore plays an amiable and grandfatherly Justice of the Peace, Melvin Bush, who is also scatter brained and marries six couples before his authority to do so becomes official. This is discovered when one of the six couples he married attempts to divorce, only to be told there is no record of their marriage. The State Attorney General fears scandal and legal reprisals from the remaining five unmarried couples. At the suggestion of the Governor’s secretary, who is also Melvin’s granddaughter, an apologetic letter is dispatched to each couple informing them of the unfortunate error. We’re Not Married, then, deals with the current state of each couple’s relationship and their reaction to the troubling news.

In her episode, Marilyn plays Annabel Norris, married mother with a toddler son. She has just won the Mrs. Mississippi Beauty Pageant as the contestant from Senatobia, Mississippi. She and her house husband, Jeff Norris, played by David Wayne, reside there. Mr. Norris acts as home maker and mother while his pulchritudinous southern bride runs from fund raiser to fund raiser with Duffy, her manager, played by the one and only James Gleason. They are trying to raise enough money to enter Annabel in the Mrs. America Beauty Pageant. Jeff is proud of his wife’s physical beauty; he doesn’t even get upset or jealous when lecherous men leer at her and whistle. However, he has grown a tad bored with his role of house husband and his wife’s constant absence. Then the letter from the Governor arrives.

Jeff thinks his problems have been solved when he is notified by the Mrs. Mississippi pageant organizers that his wife, actually an unmarried woman, as in not a Mrs., will have to be disqualified. When Jeff notifies Annabel of the predicament, she is confused at first; but when he explains that they ain’t married, she becomes ecstatic. Darling, she exclaims, how wonderful! She hugs her husband as if he had just proposed to her. Why? As an unmarried woman she can enter the Miss Mississippi Beauty Pageant and, if she wins, she can enter the Miss America one. Jeff is speechless.

Predictably, the lovely, former Mrs. Norris wins Miss Mississippi. While the vignette does not take us beyond her Miss Mississippi win, it’s easy to project Annabel as Miss America.

While the episode featuring Marilyn and David Wayne is cute, it falls short in the humor department when compared to the episode featuring Fred Allen and Ginger Rogers. And while it also has a slightly ironic ending, its ending is not nearly as ironic as the ending of the vignette starring Louis Calhern and Zsa Zsa Gabor.

Ramona and Steve Gladwyn, played by Fred and Ginger, are a couple who marry just to land a morning radio show requiring a married couple. They really want the large salaries they will each receive as the stars of “Breakfast with the Glad Gladwyns”. Predictably, they are not very glad, dislike each other immensely, and even though they never commu-nicate, never speak to each other when they are at home, the rancor of the relationship is vented openly at the radio station with some very funny dialogue. For example, Fred Allen comments that he doesn’t ask much from the radio program, only that his wife will drop dead. They are both elated when the annulment letter arrives, only to learn that contractually they have to be married to appear on the radio show. It’s all about truth, you see: no marriage, no show and no $5,000 a week. At first, they refuse to remarry. What’s the value of $5,000 per week in contemporary currency, you ask? Why, approximately $53,500, which equals $2,782,000 annually. What do you think happens in the end?

Poor Freddie Melrose, played by Louis Calhern. He is much older than his beautiful but avaricious wife, Eve, played by Zsa Zsa Gabor. She wants a divorce; so she sets him up, creates a situation in a hotel that appears to be an adulterous liaison with a woman he’s never even seen before. Not only does she intend to take the half of his wealth that the Community Property Laws allow her to take in a divorce action, she intends to take it all. And she can, too, asserts her attorney, since he committed adultery.

Initially, when he meets with his soon to be former wife and her oily attorney, Freddie is not very cooperative. They question him about hidden assets and low valuations of visible ones but his answers are vague. Hiding assets, lying, is against the law, her attorney cautions. Freddie is very concerned, excuses himself from the meeting and directs his secretary to telephone his attorney. She hands him a stack of mail. It contains the Governor’s letter announcing that he is not legally married to Eve.

When he returns to the divorce meeting, he is much more open, reveals many hidden assets, reveals the true value of the businesses he owns along with his stock and bonds. He is a very wealthy man. Eve is elated; her’s will be a life of luxury.

The audience doesn’t get to see Eve’s reaction to the you’re-not-married letter, but her shriek and the thump she makes as she hits the floor are very audible. As the episode ends, Freddie, with a lit cigar, is seated at his desk speaking by phone with his secretary: Miss O’Brien, are the two gentlemen still there? Please tell them for me that they may drop in any time now and pick up their client. All’s well that ends well.

The remaining two episodes, one starring Eve Arden and Paul Douglas as a childless, unhappy couple and the final one, starring Eddie Bracken as a GI on his way overseas and Mitzi Gaynor as his pregnant wife, are good but not as good as the other three. However, the ending to the Eddie and Mitzi vignette is sweet.

There are a few problems with the movie’s premise and plot. For example, couldn’t the Governor have written an executive order legalizing the marriages, with post dated and filed documentation? I think so. And I doubt that Eve would have been precluded for laying claim to Freddie’s wealth due to a silly clerical error. There are a few others problems like those. But my real complaint with the movie is this: there just ain’t enough Marilyn. Fox should have cast Marilyn in all the episodes thereby creating a marriage made in Heaven, a real Marilyn Monroe movie. It’s a good movie as is, but it could have been a terrific one; but unfortunately, the dimwits at Fox never comprehended Marilyn’s potential. Never did. And that represents the most unfortunate annulment of all.