A Tribute to Irving Berlin 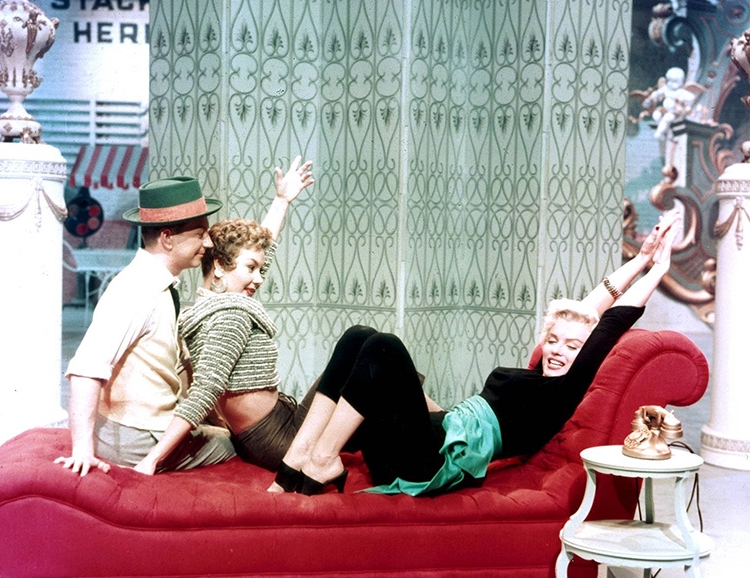 Due to my advanced age, I frequently repeat myself. It’s a common malady brought on by dementia. Usually being repetitive is not intentional; but in this case, I am repeating myself on purpose: I’m not a fan of musicals, never have been and never will be. It has now been at least forty-five plus years since I saw the Southern Belle Parade on Bourbon Street; and while I admit to making certain allowances for certain musicals, Gentlemen Prefer Blondes being a case in point, the reasons for which I explain in my review of that wonderful movie, I make no allowances for There’s No Business Like Show Business. In spite of a concerted effort on my part to like the movie, I don’t. I have viewed it four or five times, each time with a supplicant’s heart, each time advising myself to give it a chance. Maybe it’ll grow on you, I said to myself each time. It hasn’t and it won’t. I just cannot get beyond the trite story and the mundane script. I can’t get beyond Johnnie Ray’s stiff, horrid acting, and Ethel Merman’s shrill, fingernails-on-the-chalk-board voice, not to mention her boom boom boom delivery, which generates severe pain in my elderly spine and legs. In my opinion, the movie’s only redeeming quality happens to be, as you might conclude, Miss Monroe.

The movie’s plot centers around the vaudevillian act of Terry and Molly Donahue, played by Dan Dailey and Ethel Merman. What begins as a stage duo ends up a stage quintet as children arrive over the years, first Steven then Katy and finally the baby, Tim. The children are portrayed by Johnnie Ray, Mitzi Gaynor and Donald O’Connor, respectively. Mom and dad do their best to give their showbiz kids a normal life but they often sleep on benches in train stations.

Time, like linear storytelling, proceeds forward and in spite of some minor privations, the children survive and become relatively normal adults. Sister Katy develops into a sweet, lovely and understanding young woman. Steven, a slightly withdrawn and sensitive boy, grows into a quiet and thoughtful young man who decides he wants to become a priest. Baby Tim becomes a drinker and a womanizer who enjoys and actively seeks the company of beautiful showgirls, like Marilyn’s character, Vicky Hoffman. Tim’s womanizing, and his penchant for Vicky, cause mother Donahue a considerable amount of pain, worry and consternation. I’m not exactly sure why.

Tim pesters Vicky into a date and they develop a sort of goofy relationship. After Tim questions her true feelings for him and accuses her of having an affair with her producer, just to advance her career, Vicky ends the relationship, which sends Tim into a funk, the arms of another showgirl, drunkenness and an automobile accident. Papa Donahue confronts his youngest son in the hospital. An argument ensues and Terry smacks Tim in the face. After leaving angrily, Terry regrets his behavior and returns to apologize and get Tim, only to discover that the baby of the family has disappeared; but he left a note apologizing for his ugly behavior.

Mother Donahue, who never liked Vicky in the first place, blames her for Tim’s disappearance while Terry, displaying more honesty than his wife, correctly blames himself. Meanwhile, Steven, now a priest in the army, has been shipped overseas, whereabouts unknown.

Terry, distraught and guilty, takes to the road on a quest to find his youngest child. Thus, all three of the Donahue men are briefly missing in action; and since the show must go on, of course, the Donahue gals persevere. Katy orchestrates a reconciliation between mom and Vicky and on the show’s closing night, Steven miraculously appears in his uniform, as does Tim in his navy blues. Even Terry reappears; and they all participate in a massive production of “There’s No Business Like Show Business”.

The Five Donahue’s, finally reunited, along with Vicky, descend a set of steps amid billowing curtains, twirling whatchamacallits and what appear to be hundreds of dancers and singers as Molly loudly intones the title song and sends severe pain down my elderly spine and legs. I’m not very happy at that point, but at least the ending is. 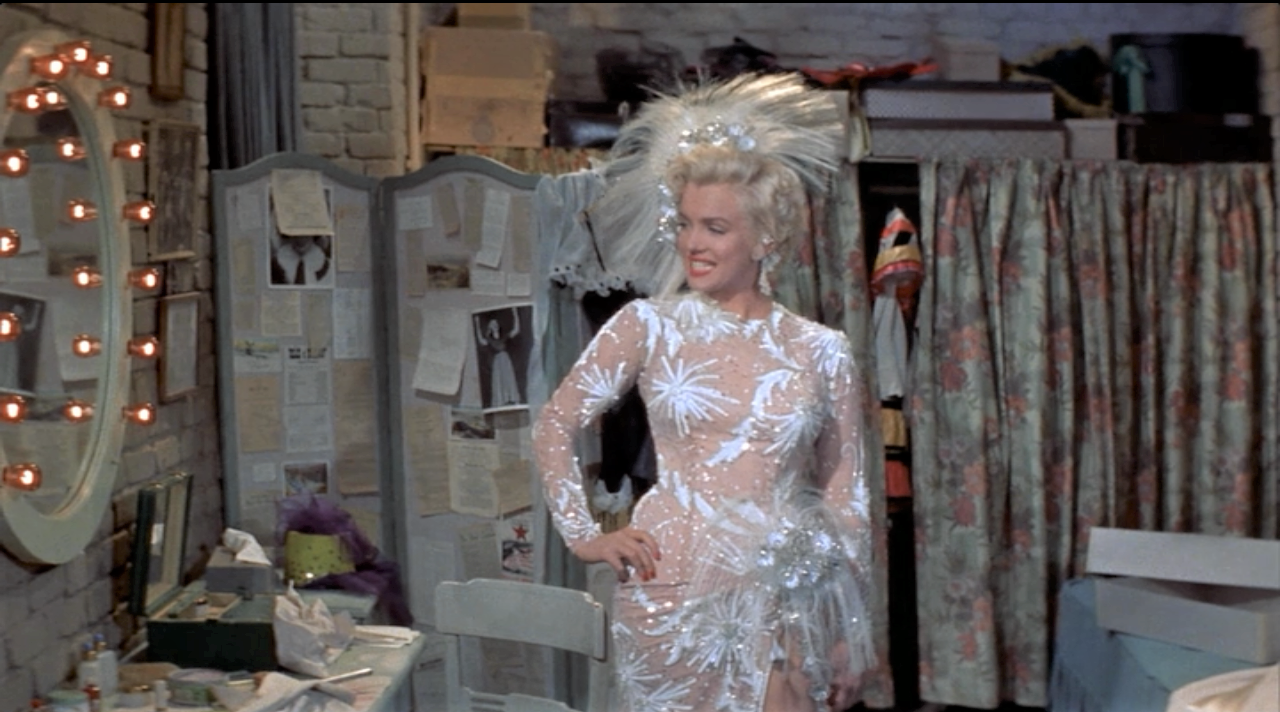 The role of Vicky, a lowly hat-check girl whose dreams are fulfilled when she becomes the star of musical revues, doubtful offered any challenge for Marilyn; and the biographical parallels to Norma Jeane are more than obvious. Marilyn only agreed to accept the role of Vicky after Zanuck promised her the part of TheGirl in George Axelrod’s The Seven Year Itch. Zanuck also offered Marilyn a $100,000 bonus if she would accept the role. Even so, she does a commendable job with the character; and it’s obvious that she tries very hard to appear interested romantically in Tim; but they have the on-screen chemistry of a bad science project. No disrespect aimed at Donald O’Connor: he is a terrific and talented musical performer. Next to Marilyn, though, he simply disappears because she pulls focus when on-screen and it matters not at all who is on-screen with her.

Mitzi Gaynor was a cutie pie for true; but next to her costar, she was a sparkler trying to compete with an array of firecrackers, cherry bombs and Roman candles.

Many harshly criticized what they called Miss Monroe’s vulgar antics. Ed Sullivan described her performance of “Heat Wave” as one of the most flagrant violations of good taste he had ever witnessed, and our friend Bosley Crowther wrote for the New York Times in December of 1954: When it comes to spreading talent, Miss Gaynor has the jump on Miss Monroe, whose wriggling and squirming to ‘Heat Wave’ and ‘Lazy’ are embarrassing to behold. Today, it all seems rather tame, bland and much ado over nothing.

Even with Miss Monroe’s appearance in the movie, it was a critical and a box office flop, costing Fox a capital loss of nearly $1M ($9.85M today) in spite of grossing a little over $5M ($48.25M today) during its initial run. Imagine what a disaster it would have been without the presence of Marilyn. Zanuck obviously imagined a colossal flop, like Alexander or Gigli or Battlefield Earth. Those movies lost enough money to make 50 movies comparable to There’s No Business Like Show Business and that quantity is just too frightening to contemplate. Over time, I understand, the movie has gained in stature and movie critics have softened their disdain for it. Now, some even profess to like the movie. Maybe someday I will feel the same way;

but don’t bet your house on that or

hold your breath until I do because