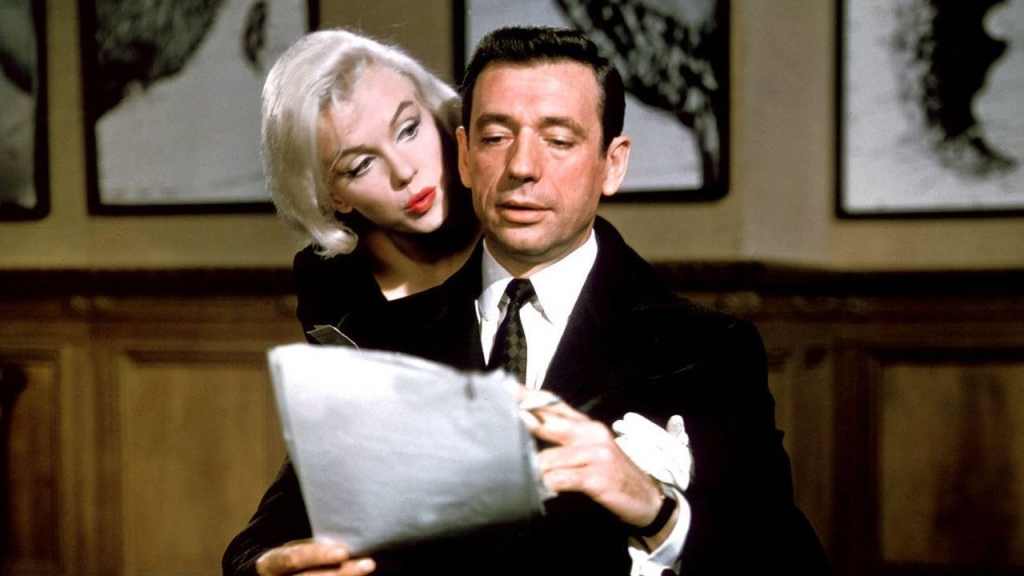 Dismissed as Marilyn’s worst cinematic effort by many criticizers and complainers, this romantic-comedy-musical concerns itself with the obligatory romance that develops between a Franco-American playboy and billionaire, Jean-Marc Clement, played by Yves Montand, and a beautiful singer-dancer, Amanda Dell, played by Marilyn. I say obligatory romance because naturally a romantic-comedy-musical requires romance naturally as a necessity. Filmed in 1960, after Some Like It Hot and before Marilyn’s final completed movie, The Misfits, she accepted the assignment just to fulfill her Fox contract, an oft repeated circumstance in her career. So, I probably don’t need to write this: Marilyn really didn’t like the role of Amanda Dell. There was nothing there with the writing, she commented in 1962, adding that she considered Amanda to be the worst role of her career. In my view, Marilyn was exaggerating, a tactic she often used to make a point. Her role as Polly, ten years earlier in The Fireball with Mickey Rooney, was by far her worst. It is worth noting, however, that Let’s Make Love was the top grossing musical-comedy of 1960. One of only two in the top twenty, it grossed $6.54M during its initial run, equivalent to $56.50M today. Marilyn’s penultimate movie, Let’s Make Love was her last romantic-comedy-musical.

When Jean-Marc Clement learns from his public relations manager, Alexander Coffman, and his attorney, George Welch, that he is going to be lampooned by an off-Broadway musical, along with Maria Callas, Van Cliburn and Elvis, he is not concerned. He says he’s flattered, but Mr. Welch only sees damage to the proud Clement name. The attorney wants to file a lawsuit and stop the show; but Coffman views that as a poor public relations choice, one that will generate some equally poor publicity. He suggests attending a rehearsal to disarm the humor and thereby prove an important billionaire can laugh at himself. Jean-Marc agrees, and along with Coffman, he visits the theater. While there, the playboy observes Amanda, the female lead, performing the Cole Porter tune “My Heart Belongs To Daddy”. Suddenly, Jean-Marc’s heart belongs to Amanda. After all, she removes her sweater and tosses it aside: it hits him in the face. It must be fate and que sera sera.

It just so happens that the day of their visit coincides with the day of auditions for the soon to be satirized celebrities in “Let’s Make Love”, the show’s title. The casting director naturally assumes that Jean-Marc is there to audition for the part of, well, Jean-Marc. When he approaches Amanda to return her sweater and introduces himself as Jean-Marc Clement, Amanda comments: That’s amazing. I saw Clement in a news reel. Hey, you’ve really got him down. He is then forced on stage and positioned between two other contenders for the part. When Amanda comments, no doubt about it, Jean-Marc is awarded the part. From this point forward, the movie revolves around Jean-Marc’s attempt to win Amanda’s heart, her love and affection while simultaneously camouflaging himself and deceiving her. He believes if he becomes an accomplished performer, Amanda will be impressed and fall in love with him. Truthfully, that really does not sound like a well conceived plan; but men, even billionaires, often behave in idiotic ways when they become smitten.

I am one-hundred and eighty degrees out of phase with the critics and their opinions regarding this movie; and, admittedly, I am also out of phase with Marilyn. Coming on the heels of Billy Wilder’s Some Like It Hot, Marilyn’s final romantic-comedy-musical is sluggish when compared to that frenetic comedy; but it is not as awful as some contend. I like the movie. The cartoon-like opening sequence is brilliant and is perhaps the funniest section of the movie, although Jean-Marc’s imitation of a rooster is just so bad and ridiculous you’ll find yourself laughing to ease the embarrassment you feel for him―at least I did. The scene in the lunchroom, with the radioactive bracelet is humorous; but more importantly, that scene offers an important and direct insight into the fundamental humanity of both Amanda and Jean-Marc.

But my favorite scene involves Mr. Welch and Mr. Burton, the producer of “Let’s Make Love”, in which the former purchases fifty-one percent of the show from the latter. Wilfrid Hyde-White is charming as Mr. Welch, so charming in the scene that his obvious ruthlessness seems less menacing. In fact, Wilfrid masterfully portrays the red faced, protective attorney who obviously loves Jean-Marc but believes the billionaire is not using his most alluring aspect to attract Amanda: his wealth. Mr. Welch observes correctly that Amanda will find his rooster imitation attractive only after she becomes a chicken.

The remainder of the cast are all relatively good. I’ve never cared much for the haughty Tony Randall but he’s acceptable as the haughty Alexander Coffman, public relations manager. Due to his five-year run on television as Felix Unger in “The Odd Couple”, I expected him to produce a feather duster or a vacuum cleaner and then to start cleaning everything in sight. Similarly, Frankie Vaughn is acceptable as singer-dancer, Tony Danton, part-time drunk and Amanda’s male co-star. Frankie overplays his one dramatic scene with Marilyn; and his smile is as forced and as superficial as his body language when he sings.

Three Hollywood legends make cameo appearances: Milton Berle, Bing Crosby and Gene Kelly. Hired by Jean-Marc as instructors who he hopes can improve his performing abilities, each does what he can with their limited screen time. Milton Berle tries very hard to be funny and I commend him for his efforts. Apparently, an original concept included additional cameos by other famous Hollywoodites; but that concept, obviously, was not realized. Let’s Make Love was the perfect opportunity and vehicle to get Marilyn and Elvis together. I am not suggesting that thought was ever considered―but the mind reels.

Most critics, along with Bosley Crowther, found (and find) Yves Montand to be so wooden that he is a veritable forest of giant redwood boredom. Montand is not wooden so much as restrained. He is, after all, playing a slightly reserved billionaire. Also, the critics skewer Yves for his unpolished singing and dancing performances when Jean-Marc becomes Alex the entertainer; but isn’t he suppose to be a neophyte? His performances would quite naturally be unpolished. It’s only with the help of Berle, Crosby and Kelly that Jean-Marc begins to improve. I doubt that a few days or even a few weeks of lessons and rehearsing would magically transform him into an accomplished, polished singer and dancer. Montand’s main shortcoming is his poor diction. His heavy accent, on the one hand, makes him difficult to understand but, on the other hand, offers a certain realism. It’s a mixed blessing; but Yves renders the powerful, personable character of Jean-Marc Clement rather well. He effectively transmits the odd insecurity of an überwealthy man who genuinely, even desperately, wants to be admired and loved for the fundamentally decent man that he actually is; but he also accepts that his wealth and his celebrity are the primary magnets that draw people to him and generate their deference. In that regard, he believes Amanda is different.

Bosley Crowther, resident curmudgeon of the New York Times, and many other critics, saw (and see) a rather untidy Miss Monroe, one lacking the old Monroe dynamism, an adroit criticism of the heavier Marilyn, one I would call magnificently fleshy, a physique she also displayed in Some Like It Hot while she was pregnant.

For my dime, Marilyn looks terrific and does an admirable job rendering Amanda Dell as a relatively well adjusted woman in her late twenties, maybe early thirties whose life has reached a certain level of comfort due to a uniformity of routine but has not necessarily fallen into dullness. Amanda transmits a maternal quality and a sincere humanity, expressed in the way she tries to help not only Alex but Tony as well and expressed in the way she relinquished the radioactive bracelet to the duplicitous and despicable Lily. Amanda is a grounded person, not unimpressed by wealth and power but not dazzled by it, either. It’s odd that she lies about witnessing Alex purchase that terrible joke about the bacon necklace. Her demeanor afterward suggests guilt for doing so, despite her laudable intentions. No harm results since Jean-Marc actually purchased the silly thing. And, too, that’s the moment when Amanda realizes her feelings for Alex are more than just a motherly concern. Marilyn’s portrayal of Amanda Dell is another nuanced, sensitive performance that has gone overlooked and has been harshly criticized unnecessarily.

Finally, while Let’s Make Love is an entertaining movie, it’s certainly not perfect and the story creates a few loose ends that are never tied. For example, did Amanda’s father become a priest after she was born? Or maybe his sect allows priests to marry and procreate. Was she adopted? By what path does Amanda, a priest’s daughter, become a singer and a dancer off-Broadway; and why no high school diploma? She mentions that she had behaved questionably in her life, but she never reveals what her questionable behavior involved, only that it was painful for her to discuss; and strangely, Jean-Marc does not ask for an accounting. For a man obsessively concerned about his image, he quickly steps into a situation that could result in a considerable amount of ridicule if discovered by the New York City press, not only from the possibility that Amanda has a lurid past, but from his appearance in an off-Broadway revue, playing and lampooning himself.

Those are not the only lapses of reason Jean-Marc experiences after he is smitten with Amanda. If she is different, is capable of looking past what she believes is his impoverished situation to the see the real man, wouldn’t she also be capable of looking past his wealth and see the real man? Yet, in the end, he tells her: But look, look what happened the moment you knew who I was: even you were impressed. Admit it. You no longer saw me; you only saw power. Pardon me if I express incredulity at this point and ask: what was the big deception all about? I’ll close with a positive comment. Marilyn’s musical performances in Let’s Make Love are, as usual, great. Her rendition of “My Heart Belongs To Daddy” is one of her best on screen performances; and if you can overlook what few negatives there are, you’ll find Marilyn’s penultimate movie to be rather enjoyable.