A Frightened Waitress in a Diner 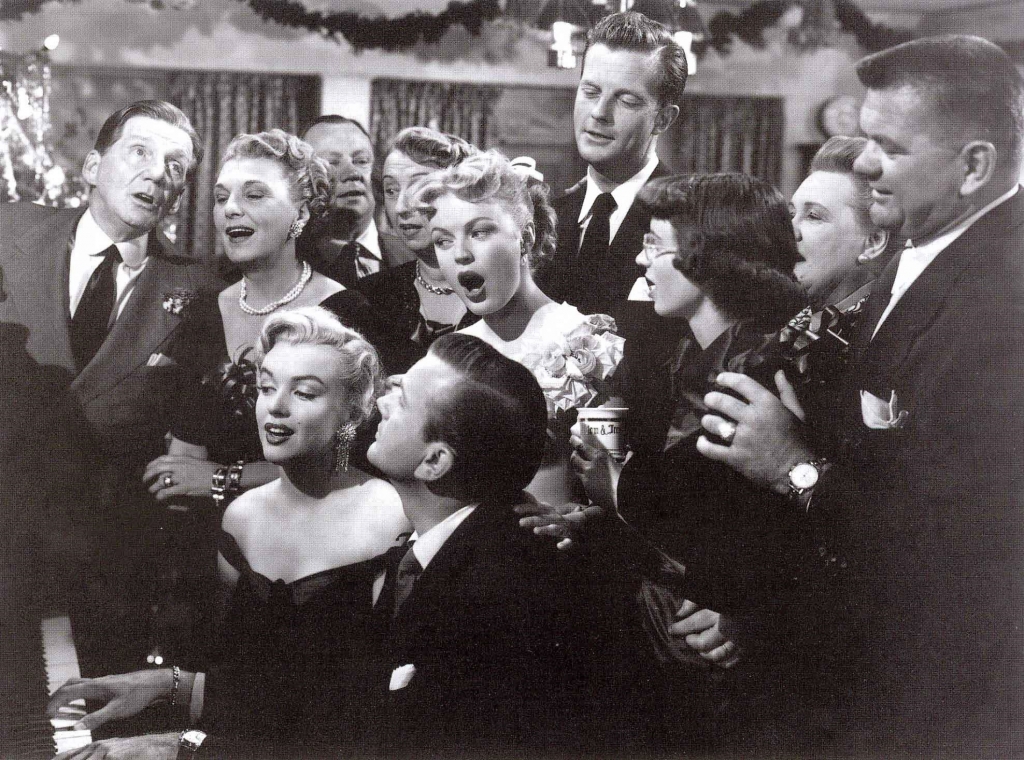 Of the class B, black and white comedies in which Marilyn appeared during her second tour of duty patrolling Fox’s lots, Love Nest is my least favorite and, in my opinion, the weakest. For an American GI, whose wife purchased a dilapidated brownstone in New York City, the battlefields of Europe have been replaced by the battlefields of home; but watching a WWII combat veteran and his wife labor with a ramshackle boarding house while he combats faulty electrical wiring and noisy plumbing, instead of Nazis in France, is just not that exciting or that interesting. Admittedly, some of the tenants who occupy the building are quirky but harmlessly so. No serial rapists, rock musicians, serial murderers or corrupt politicians, just an oily and glib but otherwise harmless Lothario, a lovable grifter who bilks money from wealthy widows in order to finance his life style.

Vaudeville legend, Frank Fay, originated the role of Elwood P. Dowd on Broadway, a role that James Stewart would make famous in the 1950s movie, Harvey. Barbara Stanwyk’s first husband, Frank was one of the most disliked fellows in show business. Uncle Milty Berle said that Fay’s friends could be counted on the missing arm of a one-armed man. Even Robert Wagner disliked the man and said Frank was one of the most dreadful men in the history of show business. Liked or not, Frank renders a believable performance as the infamous but otherwise lovable con artist, Charley Price. While Frank’s theatrical delivery of what amounts to florid bunkum certainly borders on hamminess, the blatherskite has some nice moments when he’s not trying to steal the scene from his fellow actors. Despite his infamy, Frank Fay has two stars on the Hollywood Walk of Fame.

William Lundigan studied law at Syracuse University before signing a contract with Universal Pictures in 1937. He had a long and active movie career. During the five years between 1938 through 1943, William appeared in forty-six movies. As Jim Scott, a nice guy and WWII combat veteran, William certainly provides the character with the requisite physicality and a handsome masculinity. He ardently tries to make his character interesting but alas, Jim is basically a boring fellow who just wants to be left alone, left in peace, so he can write his All American Novel. It’s fortunate for him that he can write because he is no plumber.

Love Nest was actually a vehicle for the lovely and pert June Haver, who was being groomed by Fox to replace Betty Grable; and June was oddly dubbed the Pocket Grable. I’ve searched high and low, here and there for an explanation of that sobriquet but have not found one. Fox shelved their plans to make her the next Grable with the arrival of a new, sexy young blonde on the Fox lot in 1946. Apparently a very religious woman, she became a nun in 1953; but she only practiced celibacy and remained a nun for only nine months, leaving due to poor health. After leaving the nunnery, she married Fred MacMurray, one of the wealthiest men in Hollywood and eighteen years her elder.

June portrays Jim’s extroverted and bubbly wife, Connie, with an earnest commitment to the role and the character. Connie is the type of gal who can be slightly overbearing due to her tendency to meddle, but she’s likable enough. I kept hoping, as I watched Connie befriend each of her tenants, that one would suggest she consider a new coiffure: the one she sports throughout the movie is utterly crummy.

William and June have a certain chemistry on-screen and occasionally create some sparks, just not enough, due to the Production Code, to save the movie. When Jim arrives home, for example, it’s obvious he wants and needs to maneuver his wife into bed, as any husband would upon reuniting with his wife after a long separation. But he is prevented from doing so because the twin beds in their bedroom are cluttered with junk, as if that would prevent a desperately horny man from bedding his wife, assuming she is ready willing and able. While this era of movie-making might be known as the Golden Age of Hollywood, it cannot be accused of much man and woman, husband and wife realism, can it? Cluttered twin beds indeed. What’s wrong with the sofa or the dining room table or even the floor?

Leatrice Joy began her long career during the era of silent movies. Born in 1893, she became a popular star during the decade of the twenties, appearing opposite stars like Oliver Hardy, Mary Pickford and Wallace Beery. Her career faltered with arrival of sound, so she semi-retired during the thirties. Her appearance in Love Nest was one of but a few after her semi-retirement. For my dime, Leatrice delivers the most natural performance as the kind and patient Eadie Gaynor, the type of elderly gal that simply needs a man in her life, one for whom she can cook, one she can pamper. Her homely daughter simply cannot satisfy that need.

Jack Parr thought Marilyn was boring, tiresome and disingenuous. She often carried a book that she was reading to the set but Jack claimed her never saw her actually reading. That led him to believe she was all show with no real substance. He commented: beneath the facade of Marilyn there was only a frightened waitress in a diner. Jack is now famous for being the host of The Tonight Show who preceded Johnny Carson; and Mr. Parr was certainly the weakest member of the Love Nest’s cast. As Ed Forbes, Jim’s fast-talking, wise-cracking, always impishly grinning, government lawyer pal, Jack gives it the old college try, I admit; but at his best, his on-screen appeal approaches that of a gerbil; and his acting skills I will kindly label limited. The quips he delivers are designed to be funny and witty; but they suffer from a fundamental design flaw, not Jack’s fault, admittedly. As a result, he sounds like a nerd trying much too hard to be clever, charming and attractive. His speedy line delivery does not help. Fortunately for him, he found late night TV; but unfortunately for him, in this slightly sluggish and relatively dull comedy, he has to share the screen with Marilyn and next to her, due to his gerbilesque face and in spite of his cleft chin, he simply disappears, just like everybody else does when she is in-frame. 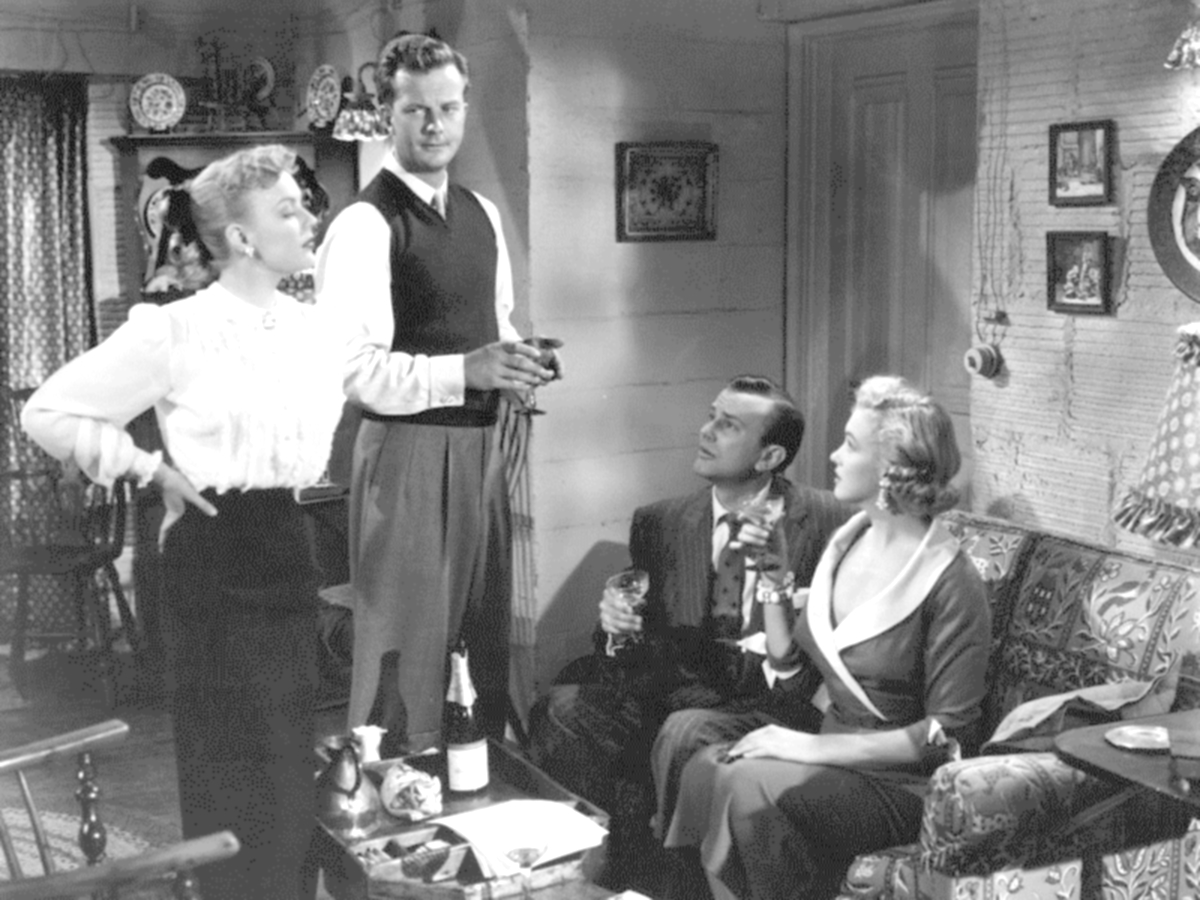 Portraying Roberta Stevens, Jim’s WAC buddy, Marilyn gets what she can out of a plot device character: she’s suppose to make Connie jealous. She is on-screen very little and says nothing of any real importance. Her outdoor, two-piece swimsuit scene with Jim and Ed, who suggests they eat dinner in her apartment because they won’t have to dress, seems a bit gratuitous. Eating dinner with Marilyn in the nude apparently was, and probably remains, a male fantasy. Her final scene also seems a bit gratuitous, pandering to another male fantasy: Marilyn in the shower.

Screenwriter I. A. L. Diamond and director Joe Newman suggest the possibility of a past affair between Jim and Roberta by having her arrive home to find him asleep on her couch. She then promptly strips and steps into the shower. Any woman not interested in Jim as a potential lover, I suggest, would have awakened him and asked him to leave before undressing, unless, that is, they were lovers at some time in the past. Due to censorship, this winked-at subtext could never be developed so what happens thereafter seems to be sexual exploitation. When a seductively nude but towel-wrapped Roberta steps out of her apartment onto the stair landing, what purpose could there be other than exploiting her voluptuous and sexy form? The producers got what they wanted from Marilyn and then discarded her, which seems a gross waste of talent and screen presence. When Roberta disappears from the movie, Marilyn’s sparkle disappears with her.

Even with all the negatives, and despite a few glaring plot holes, the movie is not terrible. It’s at least worth one viewing. However, without Marilyn, even one viewing would have proven difficult and certainly this wholesome movie would have been forgotten long ago but for her appearance in it.

Marilyn’s next role would prove to be only a slight improvement over Love Nest. As Joyce Mannering, swimsuit clad, beauty contest winner, Marilyn would find herself cast as a gold-digging blonde in what is at least a better movie and another I.A.L. Diamond penned screen-play, Let’s Make It Legal, starring Claudette Colbert and Macdonald Carey.