The MOB in Hollywood

In his book about the influence of the MOB in Tinsel Town, John W. Tuohy presented Marilyn as a drug addled starlet, her career owned by the MOB. According to his historical version of Marilyn’s early Hollywood career, after 20th Century-Fox and Darryl Zanuck dropped Marilyn in August of 1947, Columbia Pictures signed her to a contract under orders and death threats from the MOB, specifically Tony Accardo, then the Chicago Outfit’s ruthless and murderous boss. Allegedly, Accardo boasted that he was one of the Thompson submachine-gunners in that Lincoln Park garage on Valentine’s Day in 1929.

Using Handsome Johnny Roselli, Accardo’s enforcer and his Tinsel Town muscleman, the Outfit boss applied pressure to Columbia’s president and production manager, Harry Cohn, a crude and rude, unattractive and contradictory man. Horrible Harry took advantage of his employees, both male and female, and purposefully cul-tivated a looming, tyrannical image. As a warning, he often boasted: I don’t get ulcers; I give them.

On the 9th of March in 1948, Marilyn signed a six-month contract with Columbia Pictures, Inc., during which the studio paid her $125 per week and during which Harry Cohn, allegedly the most despised man in Hollywood, expected her to engage in regular frays of horrific horizontal grunting. Such was Horrible Harry’s routine with his retinue of female stars and starlets. The starlets particularly, the ones who wanted to endure and thrive on Columbia’s back lots, thereby achieving stardom, had to submit to Horrible Harry’s sexual shenanigans. After she signed the contract with Columbia, Tuohy asserted, what amounted to a Hell Week awaited Marilyn; and her time to submit had arrived.

Apparently Cohn did not consider Marilyn to be anything special, just a talentless starlet with a better than average set of tits; and Cohn only signed her to a contract just to satisfy Accardo and the Chicago Outfit. And too, we must certainly assume, considering the MOB most certainly threatened Cohn’s life, or at least Tuohy so asserted, Cohn did not want to end up an Outfit victim, partially dismembered, floating and bobbing in a fifty-five gallon drum somewhere in the Marina del Rey or Los Angeles Harbor.

During her tenure with Columbia, Marilyn initially performed for Cohn, Tuohy asserted, bartering sex for multiple bit parts in B grade movies, until she apparently rebelled against Cohn’s sexual exploitation. Summoned to Horrible Harry’s office late one afternoon for a casting couch performance, Marilyn, then a capricious and temperamental actress according to Tuohy, refused to appear and to perform. She informed the president of Columbia that she was hopelessly in love with Frank Sinatra. After Marilyn’s refusal to perform for Cohn due to Sinatra, who Cohn acutely disliked, Horrible Harry retaliated and immediately blacklisted the singer. About that time, according to Tuohy, Cohn was preparing to produce the WWII movie, From Here to Eternity; and Sinatra desperately wanted to portray Maggio, a slightly built but tough Italian-American character; however, due to the problem that Marilyn had created for Sinatra with Cohn, a problem of which Sinatra was not aware, Tuohy assert-ed, Horrible Harry refused to give Old Blue Eyes the role of Maggio.

The preceding account offered by Tuohy appears to chronicle two significant events in Marilyn’s life and career, her introduction to the dictatorial president of Columbia Pictures, and her 1948 involvement with that then poverty row studio. Tuohy’s account, however, is neither factual nor accurate; and his inclusion of Frank Sinatra as a part of the two events is certainly historically inaccurate; but, it is nonetheless interesting. What follows are some facts that clarify the problems with Tuohy’s account.

Along with her guardian, Grace McKee Goddard, twenty-year-old Norma Jeane Dougherty signed her first contract with 20th Century-Fox Film Corporation on Monday, August the 26th in 1946. At that time, she was a client of and contracted to National Concerts Artists Corporation. Harry Lipton was her representative and agent. After a year with Fox, during which she appeared on film only twice, once for about four seconds in the movie Scudda Hoo! Scudda Hay!, and once for about four minutes in the movie Dangerous Years, Darryl Zanuck did not renew Marilyn’s contract. As a result, Marilyn was not involved with any movie studio for five months; but she would remain a client of NCAC until she began her professional and personal relationship with Johnny Hyde, Vice President of the William Morris Agency. Johnny Hyde purchased Marilyn’s contract from Harry Lipton.

Harry Cohn offered Marilyn a six-month contract because her friend and benefactor, Joe Schenck, who was also Cohn’s friend, recommended her and asked the studio president to consider hiring Marilyn as a favor. Since Joe Schenck was a former president of United Artists, a co-founder of 20th Century-Fox Film Corporation and one of the original twelve movie producers who helped inaugurate the Academy of Motion Picture Arts and Sciences, he had many friends and was also a powerful force in Hollywood. So, the fact that Cohn reacted affirmatively to Schenck’s endorsement of Marilyn is not surprising. In fact, it only seems reasonable. Gary Vitacco-Robles reported that Cohn arranged for Marilyn to meet Max Arnow, Columbia’s casting director; and then Arnow recommended hiring Marilyn to Cohn.

Many books and websites have asserted, and still assert, that Cohn signed Marilyn to a long term and exceptionally lucrative contract. Obviously those two assertions are simply false. A standard six month personal services contract can hardly be called long term; and one with a total face value of slightly over $3K can hardly be called exceptional or lucrative, not even for 1948. Besides, if Marilyn had earned a substantial amount of money between the months of March and August in 1948, why was she so desperate for money that she posed nude for Tom Kelly in May of 1949 for the enormous sum of fifty US dollars?

There are additional problems with Tuohy’s account, the least of which is this: during her tenure at Columbia, Marilyn only made one movie, the low-budget, black and white B grade musical Ladies of the Chorus. Tuohy’s statement that Cohn gave Marilyn multiple bit parts in exchange for sex is obviously a fiction. Other, more sub-stantial errors include Tuohy’s contention that Marilyn was an erratic, fickle and moody actress in 1948, only the second year of her career. According to Donald Spoto, Marilyn’s colleagues and fellow actors liked her and considered her to be an actress on the rise. Milton Berle met Marilyn in 1948 and recalled that she was a genuine person lacking any affectations although she desperately wanted to be a star. Adele Jergens, Marilyn’s costar in Ladies of the Chorus, recalled that the young actress was deep­ly committed to acting, obviously carefully prepared for each scene and memorized her lines perfectly (Spoto 141).

During Marilyn’s association with Columbia Pictures, she became romantically involved with Columbia’s Director of Music, Fred Karger, her first romance since her divorce from Jimmie Dougherty, a fact unmentioned by Tuohy. She was deeply in love with Karger, himself recently divorced; and she briefly lived with Karger’s mother and sister, Anne and Mary respectively, along with Mary’s small children. In My Story, Marilyn’s unfinished memoir, she detailed the love she felt and passion she experienced for the bespectacled pianist. In that memoir, Marilyn also detailed her unpleasant encounter with Horrible Harry Cohn.

Marilyn does not mention Cohn’s name in her memoir: she refers to him as the great man. Even so, the identity of the great man is abundantly clear. According to Marilyn, the great man did not renew her contract in July of 1948 because she refused an invitation to accompany him on his yacht for an evening of sexual calisthenics. Reports of when Marilyn rejected Cohn’s sexual advance varies with biographer: a few asserted that the unpleasant encounter with Horrible Harry occurred not long after she signed with Columbia and others asserted that Marilyn attempted to dissuade Cohn from dropping her, a situation that Cohn attempted to leverage into a sexual encounter with the already dismissed starlet. Regardless of when the encounter actually occurred, Marilyn re-sisted Horrible Harry’s sexual exploitation; and in retaliation, she believed, he did not renew her contract. Finally, Marilyn must have enjoyed a degree of satisfaction after she attained international fame following the successes of Gentlemen Prefer Blondes and How to Marry a Millionaire. She dispatched an autographed portrait of herself, dedicated to her great benefactor, Harry Cohn. In his Cohn biography, Bob Thomas asserted that Marilyn’s rise to stardom and fame so rankled Cohn that he ordered Max Arnow to Get me another blonde who can be a star (Thomas 246). 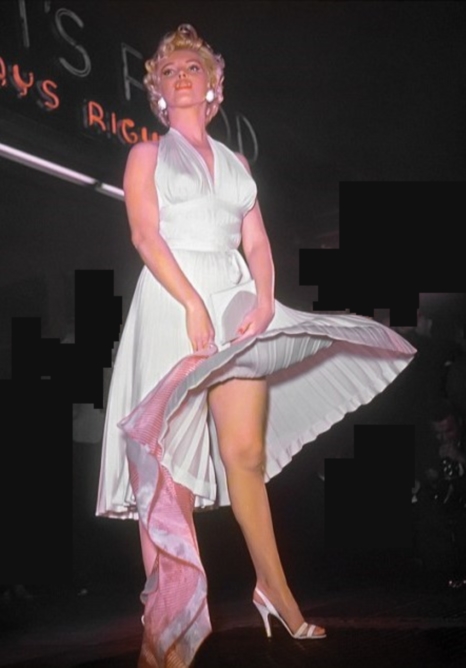 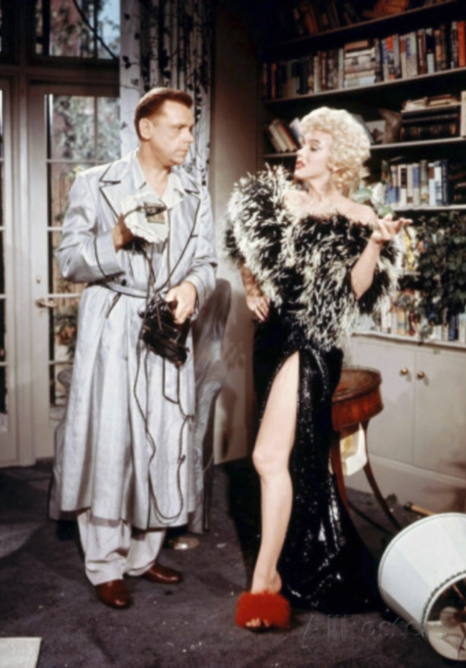