At the End of All That Precedes

On September the 18th in 2010, on the steps of Harvard University’s Memorial Church, Mitchell Heisman killed himself. He was thirty-five years old. Certainly unremarkable in and of itself, the tragedy of suicide notwithstanding; but what made an otherwise commonplace handgun suicide remarkable, beyond its public execution, was the suicide note Heisman generated: he left what has been called a 1905 page rambling, obses-sive, and mostly incoherent book/suicide note, a philosophical and psychological treatise alternately praised and ridiculed. I mention Mr. Heisman’s tragic handgun suicide hoping to create a segue to what follows.

Many persons, I think, believe that Marilyn would have left a lengthy note or at least should have, not one filling one-thousand, nine-hundred and five pages, of course, but one explaining her reasons, her motivations for sui-cide, one that included some biographical information and eliminated some of her complex life’s mysteries and plugged some gaps. Robert Slatzer asserted, in his account of Marilyn’s curious death: Any detective will tell you that a person contemplating suicide invariably leaves a note of instruction, often stating the reasons for his suicide, even though such notes are not generally made public (Slatzer 328). Of course, and as usual, Slatzer was, and is, wrong: statistically, only thirty-five present of suicides leave notes.

Even so and still, several persons searched for Marilyn’s explanatory suicide note without finding one; and the resultant question asked by the conspiracists has been invariably: why? The ever vigilant conspiracists have used the absence of a suicide note as additional grist for their murder mill. However, Marilyn did not leave suicide notes which explained why or memorialized her other suicide attempts, either; so the absence of a note should not be surprising. Perhaps, the more important question, the more correct question that has never been posed by the conspiracists is this: if Marilyn’s death was a murder dressed up to look like a suicide, to use Frank Capell’s descriptive, why did the persons involved in the conspiracy and the dressing up of the suicide scene fail to plant a suicide note?

The fact that the murderous conspirators did not plant one was, and is, in a certain way, both illogical and non-sensical; and the often repeated assertion that Eunice Murray or Ralph Greenson, maybe even Hyman Engel-berg, possibly all three, discovered a suicide note, which they promptly destroyed, is equally illogical and nonsensical. A few conspiracists have even posited that Peter Lawford, after witnessing Marilyn’s murder, dis-covered and then destroyed an explosive suicide note, which, obviously, is also illogical and nonsensical. If Lawford and Murray and Greenson were involved in a conspiracy to induce Marilyn to commit suicide, as ad-vanced by this or that conspiracist and the FBI’s Kennedy Affair Document, why would those three conspirators, or Engelberg, assuming he was also involved in the suicide conspiracy, destroy the very piece of evidence that would conclusively point to the mode of death they plotted and schemed to induce?

In a way, the absence of an explanatory note also functions as an indication that Marilyn’s death was not arranged to look like a suicide; it actually was a suicide; and therefore, we seem to be faced with that harsh reality, one difficult to accept―and it was difficult for me to accept―that suicide is the only viable conclusion, the only mode of death which remains and which the real facts actually support. Was the suicide intentional or acci-dental? Honestly, I believe her suicide was intentional; but I allow for this following remote possibility: what hap-pened on that legendary August Saturday in 1962 was a tragic accident.

By any standard applicable, Marilyn’s career in Hollywood was a brief one. In years, it lasted only sixteen; and in number of movies, she appeared in only twenty-nine. She died during the filming of what would have been her thirtieth. However, despite the brevity of her career, no actress before nor after has left such an indelible imprint as she, not only on the movie industry but on humanity as a whole. Why is this so? Were Deities involved? Did they conspire and then focus their considerable transformative powers upon Marilyn Monroe and in so doing, transform her into a luminous and irresistible personality possessing a gravity unto itself? Yona Zeldis McDonough observed that Marilyn’s special gift was her unparalleled ability to focus, even rivet our attention onto her face, her smile and her voice, and by her very presence, transform everything around her. For Marilyn, being Marilyn, Miss McDonough wrote, did what she always seemed to do: she absorbed all the available light and made it her own. When she was there, on-screen or in person, it became almost impossible to pay attention to anyone else.

But then, Marilyn is also an oddly glorious contradiction; or as expressed by Miss McDonough, Marilyn embodied so many different kinds of resonant and unsettling paradoxes. Her well-known story and image are everywhere in contemporary Pop Culture; but in spite of the mountain of scholarly books and the salacious fictions, the mountain of erudite and pornographic words written about her, she remains oddly elusive. Marilyn Monroe is an enigma inside a riddle wrapped in a mystery shrouded by a shadow. Maurice Zolotow recognized her infinite capacity to befuddle, elude and mystify. Marilyn Monroe was, in his assessment, nearly an infinite character, so vast and so complex, that neither he nor any other merely mortal human being could adequately explore or otherwise define her. Details about her life are known and several of her biographers provide an excellent accounting of those details; but still, she remains elusive. How can the world’s most posed and most photo-graphed, most famous and most written about woman be such a mystery? How can that be possible?

Our knowledge of a person comes from experiencing them, in the flesh and up close. What I know about Marilyn I’ve learned from reading about her life and her career; so in a certain sense, I know her not at all. But oddly enough, although I have never met Marilyn, obviously, and in spite of the mysteries surrounding her, I feel like I do know her. I experience her in a way that is highly charged emotionally, deeply personal and empathetic. I feel oddly comfortable referring to her as Marilyn; and I feel like I could converse with her as readily and easily as I could converse with an old friend or a member of my family. But how can that be possible? How can she so beguile me? How can she be a mystery and familiar at one and the same time, distant yet intimate? How can a person I’ve never met make me feel like we are the best of pals? It seems her power to beguile me resides in her uncanny ability to transmit this powerful sense that she understands and completely accepts, not all of humankind as an abstraction, but me as an individual, me as a person. Again, how can that be possible? Such is the mystery, the power of the dichotomy, the amazing paradox that is Marilyn Monroe. She possess the uncanny ability to be polar opposites at one and the same time. She defies classical logic and the classical law of non-contradiction. She is both the creator and the created.

We find ourselves here, now, in the twentieth year of the twenty-first century. We are rapidly heading toward the twenty-first. In virtually the blink of our eyes, one fourth of the century will be history. In two zero two five, the world will mark the sixty third anniversary of Marilyn’s death. It is doubtful if, even by then, her fame and her celebrity will have declined one bit; and if the past is any indicator of what the future holds for Marilyn, her fame and her celebrity will only increase, along with the value of anything she ever set her slender fingers upon.

I wish I could write that Marilyn is, now, the most celebrated woman that ever lived; but to write that would be primarily disingenuous. In many ways, sadly, Marilyn remains, while certainly celebrated, still the most defamed and degraded female celebrity that ever lived; and her death has been highly and perversely sexualized. Anthony Summers, who wanted to shine the light of reality on the blonde goddess, or so he alleged, found it necessary to publish a photograph of Marilyn as she reposed lifeless in the Los Angeles County Morgue, her beauty dimmed and darkened by death. That skunkish tactic proved that the misogyny brought to bear against Marilyn’s life and her memory is onerous and oppressive; and it has been brought to bear not only by men like Summers, but by women as well, even by feminists. But perhaps the most incredible and startling aspect of Marilyn Monroe is this: despite the horrid tales, despite the defamation, despite her lurid sexualization, she continues to thrive. How-ever, I for one think it’s time for all the muckraking to end, even though, I admit sadly, I know it never will; and undoubtedly, the murder debates will also continue.

Marilyn’s close friend, Susan Strasberg, closed her book memorializing the sisterly relationship she shared with Marilyn by comparing her to a powerful star, a star we wish upon which died many years in the past but whose light, forced into space by its tremendous furnace, still reaches us unabated and undimmed. Certainly that is an appropriate metaphor for Marilyn. I would hasten to add, while the debate and the disputes over Mari-lyn’s death may continue well into the twenty-first century, one fact is certainly beyond dispute: Marilyn will be young for all time. She is frozen in youth; she will never suffer with the infirmities of old age, graying and thinning hair, dark and sunken eyes, wrinkled skin or her fingers gnarled by arthritis, joints swollen; she will never be confined to a wheel chair with a red plaid woolen blanket covering her thin atrophied legs. Norma Jeane Morten-son’s indelible creation remains alive and brilliant, mesmerizing and forever beguiling. Long after the mere mortal celebrities who claim to have assumed her mantle have shufflel’d off this mortall coile, long after they have been forgotten, Marilyn will remain. There will always be Marilyn. Marilyn will continue to shine; and as Jacqueline Ken-nedy predicted: she will go on eternally.

My hope is this: that in time, the life of Marilyn Monroe and her performances on film, her place in the history of cinema, will receive the analysis and celebration they deserve without the names of Robert F. Slatzer, Jeanne Laverne Carmen, the middle Kennedy brothers, Frank Sinatra, Sam Giancana or Handsome Johnny Roselli, along with countless others, both real and imagined, adulterating her importance and fundamentally getting in her way. For Marilyn’s twenty-first century, that is my hope. A move in that direction cannot begin quickly enough; and hopefully, now, after I write this final sentence, I can return to enjoying the life of Marilyn Monroe and the amazing accomplishments of an impoverished child who became and remains, arguably, the most famous woman who ever lived who did not give birth to Jesus Christ; but she remains, most certainly, America’s preeminent celebrity and the embodiment of the American Dream. 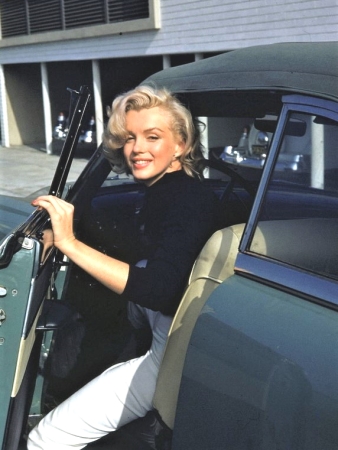 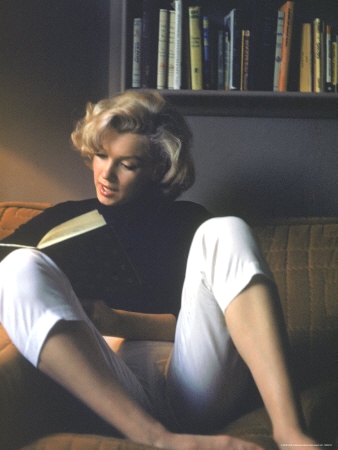