Marilyn Appears with the Incomparable Groucho 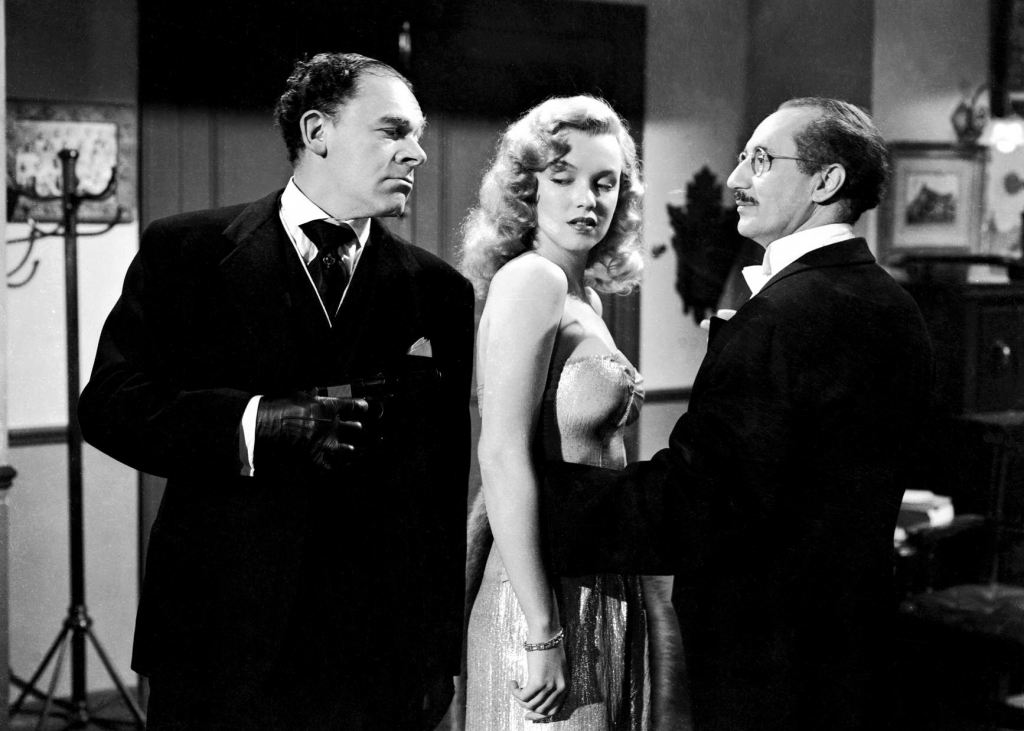 While Love Happy is not a classic Marx Brothers’ flicker show, not in the same class as Duck Soup or A Day At The Races, Horse Feathers, or several others I could mention, some of the harsh reviews I’ve read criticize it unnecessarily. Based on a story by Harpo, it is primarily his movie. Apparently Chico only agreed to appear so he could earn some money and pay some gambling debts. With Chico aboard, the producers would not fund the movie without Groucho.

Even though Love Happy follows the standard Brothers’ formula, there is not one scene that features all the crazy Marx boys on-screen at the same time: Groucho is relegated to the role of narrator during most of the goofy shenanigans. Unfortunate, for sure; and Groucho refused to wear his classic signature grease paint mustache and eye brows. Even so, for class B Marx Brothers, the movie is funny and relatively entertaining. And of course, this particular flicker show contains the one unforgettable scene with Groucho and Marilyn, a bonus none of the others have.

Prior to completing the film, the producers exhausted all of their budgeted funds, so they devised the rooftop chase scene through and around huge billboards, advertising various name-brand products. That financing tactic has been criticized over the years by cinema purists.

As with most Marx Brother’s picture shows, Love Happy has a basic premise on which to hang their usual goofiness, much of which was usually ab lib. In the case of this particular iteration of the formula, Harpo is a lovable thief who is involved with a struggling theatrical company attempting to produce a musical show entitled Love Happy. While pilfering food for the literally hungry company, he steals a sardine can, marked with a Maltese Cross. Concealed inside the can are the Royal Romanoff Diamonds. When the real mean thugs and dangerous criminals, anticipating delivery of the jewels in the sardine can, discover the can, and thus the jewels, are missing, the fun begins as they attempt to capture Harpo and reclaim the diamonds. 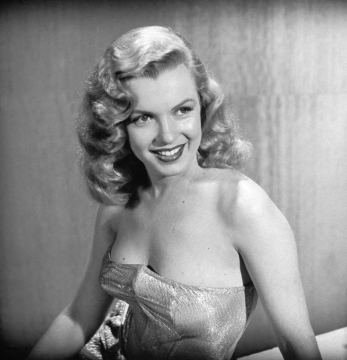 Groucho portrays Sam Grunion, a private-eye also in pursuit of the precious stones while Chico portrays Faustino the Great, an out-of-work performer who temporarily saves the Love Happy production. As usual, the piano and the harp playing wizardry of Chico and Harpo are featured during the movie.

How did Marilyn land this role, you ask? Depending on which account one chooses to believe, she got the part either due to the efforts of Johnny Hyde; or, according to Marilyn’s account in My Story, she heard about the part at Schwab’s Pharmacy and telephoned Lester Cowan about an audition. The following quotation attributed to Marilyn makes it humorously clear that she auditioned for the part.

There were three girls there and Groucho had us each walk away from him. I was the only one he asked to do it twice. Then he whispered in my ear: ‘You have the prettiest ass in the business.’ I’m sure he meant it in the nicest way. No acting. Just sex again. I had to wiggle across a room. I practiced jiggling my backside for a week. Groucho loved it.

Just how she learned about the part is not exactly clear. In an interview about Love Happy after Marilyn’s death, Groucho explained that Lester Cowan, the film’s producer, arranged an audition for the three guryals (Groucho’s pronunciation of girls) being considered for the walk-in scene. Groucho was asked to attend the audition, he said, since as private detective, Sam Grunion, he would appear in the scene with the guryal. Individually, each of the them walked across the room. Marilyn was the last guryal. When asked which he preferred, Groucho said he answered: You’re kidding aren’t you? How can you take anybody except that last guryal? Well, the whole room revolved when she walked. And it was Marilyn Monroe.

Obviously, her remarkable ambulatory skills impressed him. Marilyn’s scene with Groucho lasts a total of forty seconds but what a memorable forty seconds. However, I have a question: why did the producer and the director think that watching Groucho duck-walk out of the scene and then re-enter it could possibly be more exciting than following Marilyn as she sexually wiggled herself across the room? Why, pray tell. Nothing is more exciting than watching Marilyn, whether she is sitting, standing, walking or running. Absolutely nothing.